Summer to Fall (off the mountain)

Wow, the time flew. Between great fun with Astra Heights at cool events such as Venicestock and guiding in the Sierra with Sierra Fly Fisher, I also worked on flying my jeep off of the roadside in Yosemite. Oh and don't let me forget Nicaragua with Rebecca, Quinn and Megan followed by a wonderful trip with Alexis and Jeanette to Mexico then a trip with Noah Snyder and Jim Lowe into the Bob Marshall Wilderness, Montana. 52 miles round trip on foot! So summer had all sorts of lessons learned such as highsticking the Merced at low elevations for hidden pockets of unusually strong wild bows to correcting a vehicle's direction to avoid rolling it! *See photos below* As many of you may know, Oprah recently went camping in Yosemite National Park. She apparently did some fly fishing too. I work seasonally in the Sierra and often enter the park. In the middle of summer, after a fun day of guiding, I went off the road. I walked away unharmed. I am very lucky. 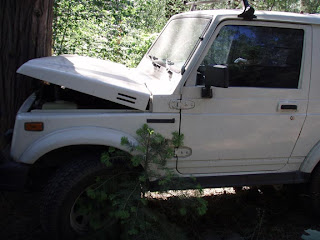 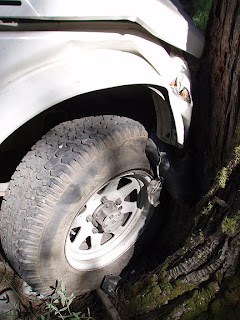 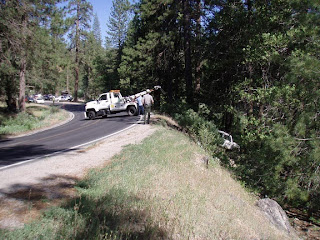 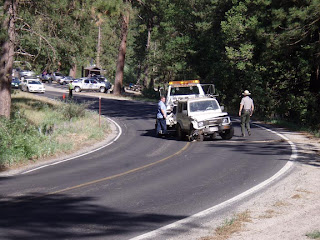 That very evening, a rather brazen tow-truck driver pursuaded me that using his pulleys and chains, he could "stretch" the vehicle back out to a functional state. I was too exhausted and upset to even protest. The next day I used the jeep on a guiding run and the following day I drove it to LA! Feeling the little jeep's spirit, I began plotting the salvage process.

Jesse, in Corona, has a yard full of parts and this began the "healing" process. This photo below shows him pulling a hood off on an old Samurai for my wounded Sammy. I also had a favored mechanic inspect the frame, alignment and state of the hubs along with many other essentials. 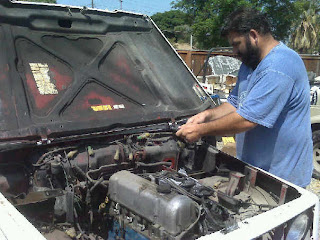 A few weeks later, with all parts in hand, I had the vehicle taken to the doctor. 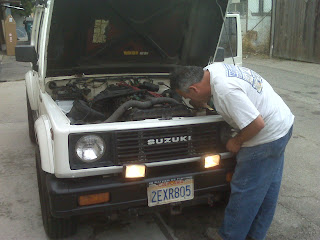 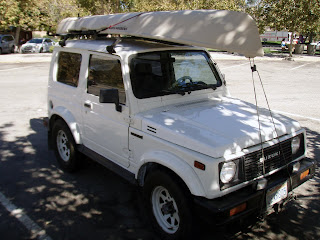 Now, you thought it'd be so easy? Of course the National Park Service's law envorcement division hit me with a ticket...(no I was not drunk). Did you know that they have a cute little court house right in the heart of Yosemite!!!???? Click on the image below for a slightly larger look. I ain't joking. 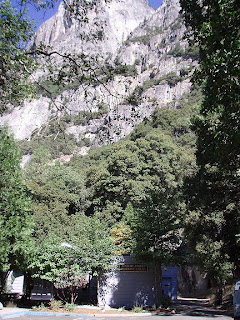 After my hearing, I got the fine reduced and they also offered traffic school. I am about to wrap up my online course. I am re-visiting important lessons such as "Don't stall your car on a railroad track". 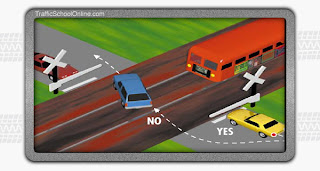 This entry is being posted as I waltz again into the phonebooth of rock and emerge on Monday in Berlin Germany as a member of a great band The Fuzztones. I'll be roll-casting a guitar cable in Italy and Greece to name a few. Never a dull moment and 2010 is far from over.
Posted by Bernard Yin at 9:16 AM 5 comments: