The DDs - Outside of the Box

As kid in Nor Cal, in the suburbs of San Francisco, I was often limited to urban angling adventures. You know, the local duck pond or uninspired culvert and a few of my angling mentors inspired me further with their tips and strategies. It still is and was a fun game as we now see and hear reports from those who have grown passionate about LA River carp. That's just one of many examples of course. Thinking creatively about where fish might persist also applies to areas less than urban and Dick Dahlgren's legacy is built on this type of thinking. His story also carries some significant messages about trying to live and enjoy life while also dealing with humans, municipalities and so forth. The Victorville's Daily Press' Outdoor Report offered this summary of Mr. Dahlgren's angling legacy and is a worthy read: LINK

Mr. Dale took a less conventional approach to guitar and all but built a genre (surf music) upon it. A simple google search on this man's name will result in an explosion of videos, articles and images. I am experimenting in this blog entry by keeping this homage to mere paragraph. He passed away in March of this year. This is his most recognizable piece as performed live during his heyday: HERE 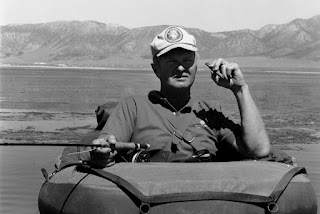 Posted by Bernard Yin at 4:28 AM No comments: