The Corbina can be skittish. Do they only eat sand crabs? Of course not. What else is there? Invertebrates right? Took this bean on a small San Juan Worm type fly. 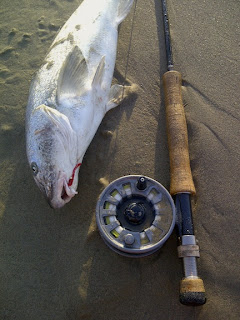 and this one on a good ol' Merkin 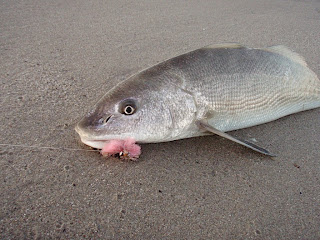 Sometimes paradise is down low. Take a few bruises and close encounters with rattlesnakes and the 13 year old nature freak inside screams for joy. Wait, let's throw the rattlers back in! Black Diamond Session with Jay Dunkley. Note in image #2 how far back Jay sits while probing the foam patch for big browns? THAT is the secret! Click on each image for an exploded view. 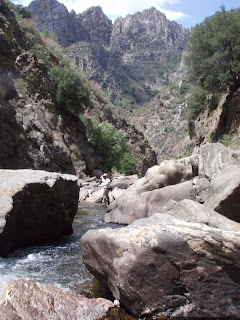 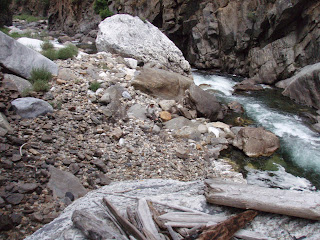 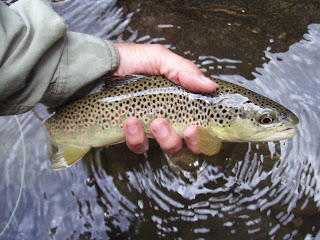 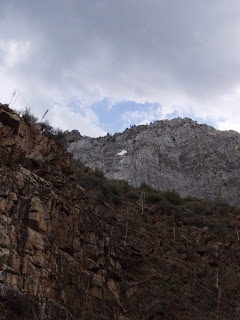 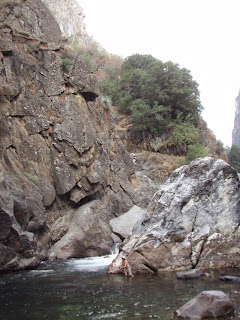 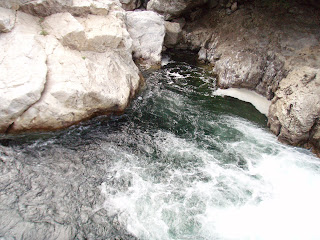 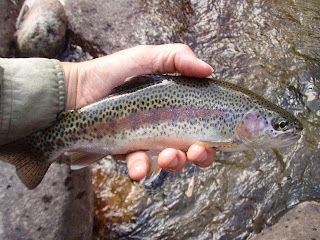 The Do Nothing Method 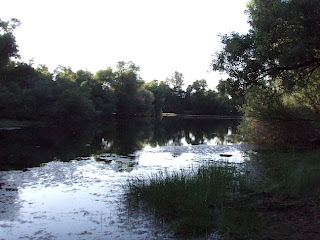 I was recently treated to a quick evening session on a small Sierra foothill pond by Mark Lloyd. This provided me with a chance to revisit fishing for Largemouth Bass for the first time since my buddies and I would sneak into golf ponds in San Diego while in college. 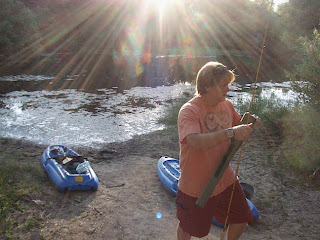 That was eons ago and eons are substantial units of time. As I paddled out into the pond, I began instinctively casting towards cover and waiting for a take. That's bass angling 101 fer cryin' out loud! There wasn't much response from any fish at first but bobbing around at dusk on a pond is a great joy unto itself. It was already a great evening. I jokingly complained to Mark about the fishing. Suddenly while nudging the popper along in the shadows a small bass took and the skunk was off. Stoked, I brought the hunt up a notch and began casting in a more intense fashion; working hard at dropping the popper as close to branches and overhanging limbs as poss. Barely 10 minutes into our session, I made a cast and a calm came over me so I just let it sit and sit and sit. In hindsight I don't even know what compelled me to just let it linger there. Maybe I was trying to get a drag free drift! *Yes kids that was a joke!* Suddenly the water exploded with a larger fish that went deep, then it pulled in circles and then bolted for cover under some branches. No dramatic jumps but a solid fight. I hooted and hollered like an idiot. Fearful of losing the fish in the submerged branches, I pulled back hard and was lucky enough to turn the fish without losing it. A little more fight and to the boat he came. Not a hog but not a small fish either, I felt rekindled the thrill that TOWBs (Those Obsessed with Bass) feel. 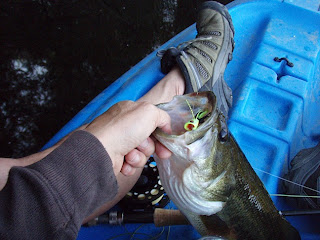 So let's wax philosophical here. As a kid, anything that had to do with fishing caught my attention. A short-lived subscription to Fishing Facts magazine left the phrase "Do nothing method" echoing through my skull. The author of this one article raved about super laid back presentation methods. This phrase stuck with me and I have cited it frequently when musing over so many aspects of life. Sure, a call to action and being motivated is important but if you stand on the beach, a wave will wash towards you whether you dance a jig or lay down and take a nap. In other words, at times in life, too much effort is wasted effort. Neil Young's guitar solo in Down By The River has a famous one note passage but it's far from lazy. Get it? Ok I'll stop ranting! Now let's consider that the "do nothing approach" to still requires something else: FOCUS! See where this is going? Zen and the Art of Bass Fishing! Take a step back from your NASCAR-flavored how-many-sponsors-ya-got? approach and let that popper sit as you contemplate the cosmos! Now back to our regular programming: Earthly Pleasures Without Shame. Good times, good times. Thanks Mark! 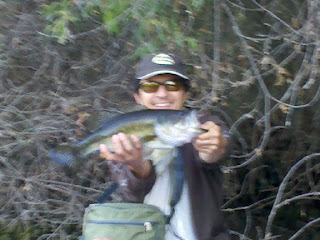 Finally, if you are in need of a great fishing quote, chew on: "it's just a matter of putting this "dying" annoyance in their interest zone" courtesy of http://www.bassresource.com/fishing/do_nothing.html
Posted by Bernard Yin at 7:12 PM 1 comment:

Labels: Bass on the Fly, Charlie Brewer, Sierra Bass, The Do Nothing Method

Loved by so many types of fish! Here's a hopper-caught trout from the Merced River. 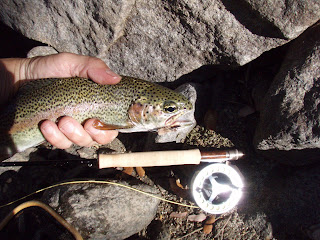 * Sung to the tune of Space Truckin' by Deep Purple 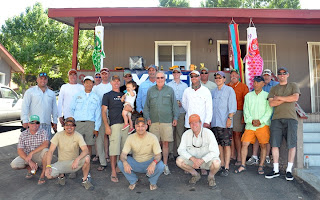 Photo by Michelle Woo Bowman
Recently I had the pleasure of doing some social media support for a fishing contest. I also paid, like everyone else, to enter and compete. This was The Carp Throw Down held at Lake Henshaw and hosted by Al Q, Conway Bowman and had the participation of a great collection of cats. Most were from So Cal. I have never competed in an actual tournament and add to this the fact that I was fishing new water. I was happy to fly the newbie flag on this weekend. The whole experience was in great company which added a lot to the experience as well. Even while competing, some of the guys would share ideas and words of encouragement. It was clear that some had dialed it all in better than others and had I not fished the previous day AND had some great help from Randy, I would have had a slower start. 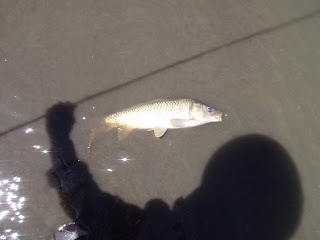 For those following this event the word spread like wildfire that we were catching Carp on hopper imitations. The area was so rife with these that they would flush by the hundreds as you walked the shore. Needless to say, many could be seen int he water. There were, however, some lulls in the bite during which I did some experimenting. People often use various buggers as go to flies for Carp but I and others only scored catfish when we did this. I haven't polled all of the anglers so this is purely what I observed within a closer circle. Seeing that the fish were cruising just below the surface but not always rising to a hopper, I had success with a trout rig (hopper and dropper). Quite humorously, the dropper was an actual #16 mayfly pattern. Feeling goofy and forgetting that it was a competition, I used a beadhead lightning bug. I had the dropper a mere 8 inches under the hopper. I caught carp and also got catfish this way. As the day wore on, it was clear that channel cats were surface feeding too. Saw it with my own eyes yessir! 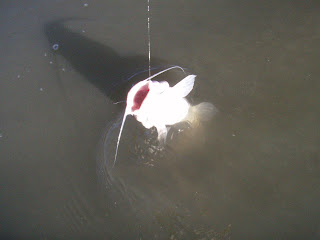 At one point, a dust devil blasted us for a few seconds. At this time, it brought a ton of debris into the water and I witnessed a small flury of surface activity as the carp swam around checking out what may have been blown in. They were very aware of what just happened. It was a sight to see. A flotsam hatch! The whole ecosystem of the lake and the environs was right there before your eyes. Abundant fish, numerous birds of prey, lots of food for the fish in the form of terrestrials and tons of birds in general appreciating the bugs. On the night that I camped, I awoke to hear someone's dog getting attacked and killed by coyotes. There was no doubt about it. The soundtrack told a story and ended with a celebratory wave of yelps and howls that resonated through the valley in a bizarre movement not unlike the "wave" at a sports event. It was all in your face. 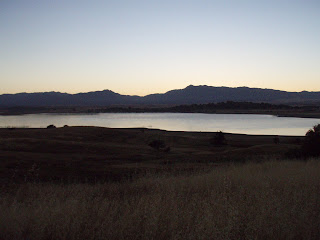 Some great images are at the Facebook page as well as the CTD official site. Here are the links: http://www.facebook.com/CarpThrowDown and http://carpthrowdown.com/ A closing note is a hats off to Dave Wratchford who won the event in the Wading Division and in the Total Count category. He fished with focus and nary any breaks. He also pre-fished with similar determination. Add to this skill and a quiver of smart techniques and he took the prize; well deserved. 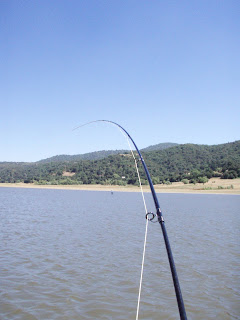 I have been remiss to post for far too long. In keeping with my desire to keep this blog a tad offbeat, allow me to post an interesting event which occurred just recently (May 2012) in the surf. A fair hooked shovelnose ray while fly casting in the surf ... 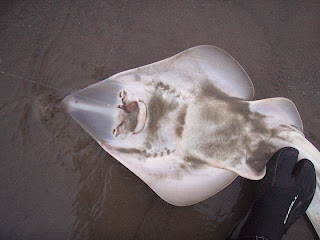 Posted by Bernard Yin at 3:02 AM No comments:

Since we're still fresh into the Year of the Dragon (my birth year by the way), I best post this now. I wasn't always a huge fan of the carp but knew it to be strong and capable of showing up all over the planet. Sure humans have helped it along but its persistence has earned it respect in my book even though I never have caught them deliberately. So what is this post REALLY all about? Two things: It's the fact that Chinese legend has it that the carp's reward is to become a dragon. This means that I have a carp in my ancestry in some cool heritage-meets-mythological fashion. I confess I get a kick out of it. Here's an interesting thread which discusses the myth at the China History Forum. Second, there's a great event in June that celebrates this fish... As follows: Conway Bowman down in San Diego has been a fan of targeting these fish and Al Quattrocci whipped up this solid poster for an event later this year. America's love/hate relationship with the carp gets put aside as cool cats target these fish with flies on a summer day in California. How can you say no? 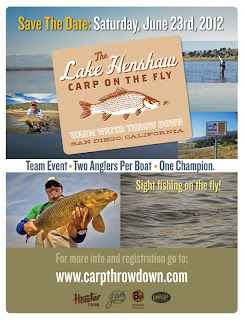 Details here: http://carpthrowdown.com/
And if you aren't sold on it yet, it's only a matter of time before carp anglers start getting all the babes. Our friends in Europe clearly have somehow brought these elements together (I remain skeptical). Click here for carp-flavored-pinup

Posted by Bernard Yin at 4:57 AM No comments: 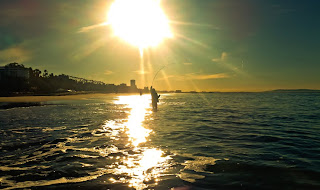 Through the fog of a flu-like bug and just prior to a nice swell which has sent some of the best looking waves I have ever seen in So Cal in my life, I snuck in an AM session with fello anglers. Perch hookups galore. Photo cred: Al Q. Click on th eimage - it blows up nicely.
Posted by Bernard Yin at 7:10 AM No comments: 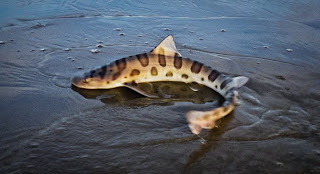 Playing in the surf this morning with fishing buddy Al Q had this specimen make a showing. Returned the animal to the ocean to be free and grow larger. I have a soft spot for these fish. I don't like fishing for them but they are really beautiful. Remember too folks, leopard sharks are very much considered harmless.
Posted by Bernard Yin at 9:00 PM No comments: 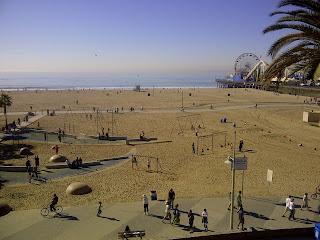 New Year's Day in Santa Monica. Bono was nowhere to be seen.
Posted by Bernard Yin at 8:22 PM No comments: